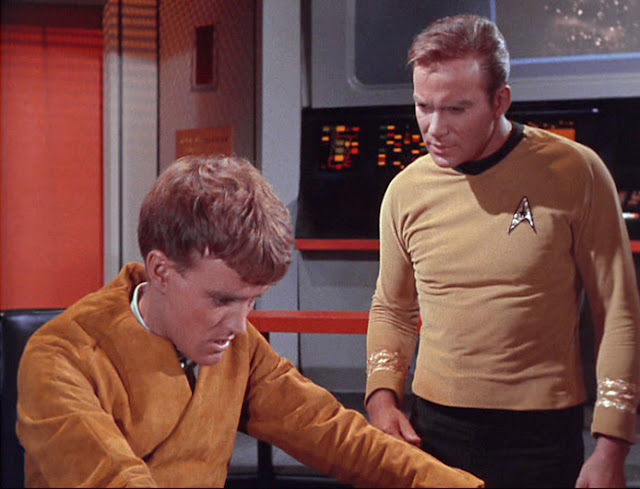 What's this? Another episode so soon? Didn't I just review The Man Trap? Well, you get a two-fer tonight because I couldn't sleep! Anyway, another Episode another person with poorly defined reality altering powers. Can't trust those eyes in Star Trek, I'm telling ya.


Okay Star Trek. First 3 Episodes all involve not being able to trust some human looking alien/projection person thing. If it didn't exist before, then they established the trope and it has already gotten old. Charlie, the boy of a thousand faces, was orphaned when he was 3 on an alien planet and somehow survived 14 years. So as you can imagine, he turned out pretty normal.

Since we are hitting Charlie in the middle of hormone teenage confusion, the first thing we see is he goes kind of weirdo on miss Rand. At least this episode calls out that its wrong to slap a girls butt. Seems very Mad Men like that it would be acceptable, so +1 for calling people out.

Also, I like this episode's costuming. Bones has a pretty comfy looking shiny shirt, Spock sports a standard uniform, and Kirk is styling it up with a casual green tunic with golden leafing. We also get a look at whatever TOS's equivalent of 10-Forward is. Spock goes to town being all flirty with Uhura again leading to a really actually pretty good musical number. I want more of Singing Uhura. Charlie is not amused.

After Charlie shuts down Uhura's voice so he can have the spotlight, we are treated to 30 minutes of Charlie acting weird. Knowing things he shouldn't. Using brain powers to explode ships and melt chess pieces. Yeoman Rand tries to set up Charlie with some random girl and it goes poorly. He gets his creep on with her. It's super uncomfortable for everybody. We are now 3 for 3 on episodes having one of the major plot points dealing with sexy time with the ladies. The Adam and Eve thing from The Cage, Bones's girlfriend on the Man Trap, and Charlie's hormones.

The Enterprise gym looks like a fun place. Also, good to know being a red shirt is dangerous even in the gym. Charlie makes Kirk's sparring partner disappear and then Kirk shows some serious balls in threatening Charlie when he won't go to his room. We see Kirk being a commanding daring officer and even kind of a father figure here. Good character development I think. Later on Picard kind of has the same arc with Wesley on TNG. Also, Shirtless Kirk Alert!

Charlie also makes all the phasers disappear which makes me wonder where they get re-stocked? What if another alien invades before they get to Earth Colony 5? Does that colony even have phasers? Can he bring them back? Then they try to decide what to do and TIGER TIGER BURNING BRIGHT IN THE FOREST OF THE NIGHT. Again with the vaguely defined powers. Make stuff disappear, control people, melt stuff, turn people into iguanas, instantly aging other people, removing their faces. These aliens need rules! It get's pretty creepy actually.

Kirk's plan to overload Charlie is a good one, but I don't see why he needs to control everything on the ship... I guess he can't be selective?  Then floating green head ex machina takes him away and returns everything to normal. Kind of a cop-out ending actually... but there's actually a pretty decent bit of acting right at the end that made me feel pretty bad for the kid if he wasn't such a douche bag earlier.

Anyway, you are gone but not forgotten young Charlie. Have fun with the loveless green headed people.

428 people on the Enterprise crew it seems.

Apparently the Enterprise has many "entertainment tapes" .... lol.
Posted by Bgrishinko at 12:38 AM
Email ThisBlogThis!Share to TwitterShare to FacebookShare to Pinterest