Games as a means of storytelling

Video games have gone through a strange evolution. From the early days of two simple paddles bouncing a ball back and forth in Pong, to the modern day of . . . well, hitting an invisible ball back and forth with two Wii remotes in Wii PingPong. However, a video game has pretty much always been just that, a game. Sure, you may say that there are good story lines in games, but the game is still just a game with a story. You play 45 minutes of game and you are rewarded with a 5-10 minute cut scene that tells more of the story, then you simply rinse and repeat until the epic conclusion. Some modern games are trying to change that dynamic. How can you make a good story that just happens to be a game as well? What if the story was played out the entire time you played the game and not just after a battle? Not a moment is wasted. The games of the future will have this dynamic. One already does. Heavy Rain is a unique game that you cannot fail. There is no moment in this game that does not tell the story. If your character dies, the story moves on without him and the ending changes. Your choices can give the characters a happy ending or end the story in tragedy. You will get emotionally attached to the people in this game in the same way you might with those in a good novel. In this way, games have joined the ranks of books and movies as being a legitimate method of storytelling.

Posted by Bgrishinko at 9:31 PM No comments:
Email ThisBlogThis!Share to TwitterShare to FacebookShare to Pinterest
Labels: Interesting and Fun Stuff, Video Games

Privacy on the internet has become an increasingly hard to control problem. We consistently hear about Facebook, Google Buzz, Twitter, and other social networking sites and the problems they have regarding privacy matters. I believe, however, that privacy on a computer is fictional. If you don't want people seeing certain information, then it shouldn't be put online. In today's society nearly every computer is connected to every other computer in the world. The only thing separating your work and information from someone else out there is a flimsy password. In fact, with cloud computing becoming more and more popular, your information can be stolen straight out from underneath you even if you haven't been online for weeks.

Recently Google was hacked by what they assume to be government hackers from China. They are probably right, but I bet that the United States has just as many hackers on it's own payroll trying to obtain secrets from China. Hacking is the cheapest and fastest way of espionage that we have in the current world. Since all of our information is connected somehow, it is just a matter of time before people find different ways to access it. The internet can seem like a scary place in our day. Is everyone out to get us? Nope.

While we need to understand that anything we put online is easy fodder for hackers and people who want to steal our identities, there is also a whole army working to protect us. Most these people don't even get paid to fix our problems. Jonathan Zittrain gave a speech on TED.com about how the internet restored his faith in humanity. Despite the trust issues, the web is home to the world's greatest acts of kindness. When a virus infects systems, hundreds of people band together to fix it and kill it as soon as possible. Wikipedia is another example of people doing good on the web, just for the sake of doing good. Google's motto is "Don't be Evil!" for crying out loud (although people will argue whether Google is actually evil or not).

We need to think of the internet as an online version of those big bulletin boards you see at Universities. Anything you put on it can be taken down and used for who knows what reason. If you put up a message with your phone number and address then say you need to carpool to California next week, some bad guy can use that information to break into your house and steal your stuff. Most people understand this, so they only put up a phone number or an e-mail address. When people use the board smartly, good things happen. Good people help out other good people, just because they can.
Posted by Bgrishinko at 10:56 AM No comments:
Email ThisBlogThis!Share to TwitterShare to FacebookShare to Pinterest
Labels: Interesting and Fun Stuff

So my Mom came and visited a couple of months ago when we had Lucas. It was really great and fun to have her around for a while. When she came though, she brought with her a couple of VHS tapes that had a glimpse of my past. They sat on our shelves like that until last week when I went and transferred them to DVD.... and oh my goodness... that was a blast from the past. I'm probably 14-15 years old in the videos and things are CRAAAZY... we had so much fun though. Among those guest starring in the video are such illustrious names as Steve Cann, Daniel Jacobs, Ryan Rigby, David Horrocks, Nanny and Gramps, Hunter Petty, a cameo by Dustin Brown, Tiffanie Payne, Danielle Kikuchi, Cory Dahl, and many many more!

It's weird though because we are all so young and well, frankly, somewhat immature. Funny how our memories make those events better than watching them on film. I knew we were having fun at the time. Watching back I can't help but thinking... man, we were weird. But you know... I wouldn't have it any other way. I thought about posting some of the video... but then I just thought that would be inappropriate without everyone's permission. Cause, well, 8th-10th grade isn't everyone's best years. But here's a bonus screenshot... 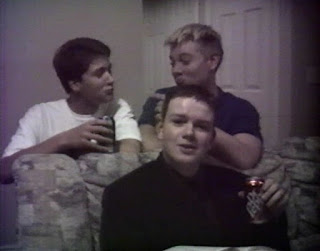 Posted by Bgrishinko at 2:00 PM No comments:
Email ThisBlogThis!Share to TwitterShare to FacebookShare to Pinterest
Labels: Family, Interesting and Fun Stuff

The LDS church has recently updated one of their most popular websites. The new FamilySearch.org is an amazing combination of technology and genealogy. Genealogy can be a very confusing a difficult thing to comprehend, but the new website makes it really fun to casually browse through your own history. As I browsed my ancestors back to the 1700's, I instantly realized the benefits of combining computer databases with family history work. FamilySearch showed me that I have duplicate entries in my family line. Apparently, one of my ancestors is his own great-great-grandfather. Mistakes like this have been difficult to spot in the past, but with the help and aid of computers, the process has been streamlined. There are some drawbacks from what I could see. Much of the recent information is based on current church records, yet it seems I haven't been baptized or confirmed; the same holds true for my mother. Once the church is able to seamlessly streamline current records with manually entered records together there will be no stopping the promise given at the end of Malachi.
Posted by Bgrishinko at 11:03 PM No comments:
Email ThisBlogThis!Share to TwitterShare to FacebookShare to Pinterest
Labels: School Assignment
Newer Posts Older Posts Home
Subscribe to: Posts (Atom)